On 10 November the Bury Bach Choir will sing Vaughan Williams’ hauntingly beautiful cantata Dona Nobis Pacem as part of our commemoration of the Armistice Centenary.   The concert is supported by the Vaughan Williams Charitable Trust. 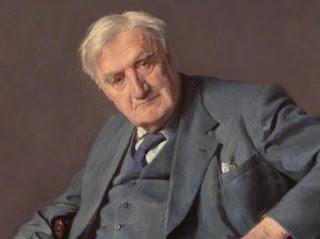 The cantata was commissioned in 1936 for the centenary of the Huddersfield Choral Society, and written amid growing fears of a new war in Europe.  The words come principally from the scriptures and the poetry of Walt Whitman, written during the American Civil War.

Whitman’s poetry seems to have had a profound fascination for British composers in the early 20th century, including Delius (Seadrift), Vaughan Williams (A Sea Symphony) and Holst (Ode to Death).  In 1911 Vaughan Williams began to compose a setting for Whitman’s Dirge for two veterans, but perhaps because he felt it was insufficient on its own, he put it away for 25 years, when it emerged as the solemn fourth movement of Dona Nobis Pacem, describing the moonlit burial of a father and son killed in battle.

Huddersfield Choral Society is one of the UK’s oldest amateur choirs, conducted at its centenary by Malcolm Sargent.  When Vaughan Williams discovered that Sargent was due to be touring Australia at the time of the centenary concert, he wrote saying that he would have to reconsider his decision to write the new work if anyone other than Sargent was to conduct it.  It seems Sargent talked him round, as DonaNobis Pacem was performed on 2 October 1936 with the Hallé Orchestra, conducted by Albert Coates.  Vaughan Williams was there, and according to the Society’s official history, he came on stage to acknowledge the applause ‘and counted it an honour to have it performed for the first time by such a distinguished company’.

Bury Bach Choir has a direct link to that concert – the father of one of our current members was a member of the Huddersfield Choral Society and performed in the premier, and she is actually using his score for our concert!

Dona Nobis Pacem is performed less often than many other choral works, but received an acclaimed performance at this year’s BBC Proms, with the BBC Symphony Chorus and BBC Symphony Orchestra, conducted by Edward Gardner.

Its original orchestration is for a full orchestra and would be impossible to stage at The Apex, but in 2017 Jonathan Rathbone - formerly a choral scholar at Christ’s College, Cambridge and Music Director of the Swingle Singers, and currently director of several London choirs – composed a new arrangement for small orchestra, originally for King’s College, Cambridge, which we will perform on 10 November.  This has made the work accessible to many choirs while retaining all of its drama, power and beauty.

For the other half of the concert we will perform Duruflé’s Requiem, another work of great beauty, which will be the subject of another post very soon; now published, click here to view.