Bury Bach Choir is delighted that Camilla Jeppeson is making a very welcome return to sing with us in the Apex at our "War and Peace" concert on 10 November, for the Armistice Centenary; she last sang with the choir in "The Glory of France", a concert of French music in St Edmundsbury Cathedral in June 2014. Camilla seems equally pleased: ‘I am very much looking forward to singing with the Bury Bach Choir again; they are a very welcoming choir and are such a pleasure to sing with’. 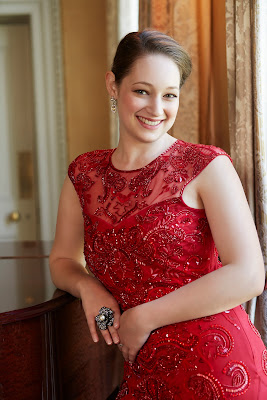 Camilla will sing the hauntingly beautiful soprano solos in Vaughan Williams’ Dona Nobis Pacem – relatively short, but of pivotal importance to the piece. She says ‘The recurring plea for peace throughout the score is chameleon-like; at first ethereal, later sobering and solemn and ultimately heart-wrenching, especially so as we will be singing it on the eve of such a momentous anniversary’.

Camilla studied as a pianist before training as a singer. After completing the Associated Studios Opera Course in London, she began studies with world-renowned bass Graeme Danby - the Choir’s Co-President, dubbed ‘the Great British Bass’ by BBC Music Magazine.

Most recently, Camilla made her Italian debut as Lauretta in Gianni Schicchi, and her house debut at the Teatro del Giglio in Puccini's Tuscan home town, Lucca. Her operatic roles have included Blonde (Die Entführung aus den Serail), La Sagesse/Lucinde as part of the Grimeborn Opera Festival at the Arcola Theatre and Zerlina (Don Giovanni), for which Camilla received critical acclaim: ‘her “Batti, batti” was a highlight of Act 1’.

Other engagements have included performances at the Royal Greenwich International Early Music Festival, an appearance with the Rameau Academy accompanied by Rob Howarth and performing as a soloist for Benslow Music's prestigious Baroque opera.

Camilla enjoys chamber music, and this year has marked the inaugural UK tour of her voice and harp dup Voce47. The tour will culminate in a recital at St Bride’s Church, Fleet Street.

Also in demand as an oratorio soloist and recitalist, Camilla has performed all across the UK including the Royal Festival Hall, Cadogan Hall, St Paul’s Cathedral and The Ritz. She says ‘Vaughan Williams' music has always struck a chord with me. I find his folk-like symphonic writings particularly peaceful and moving. Dona Nobis Pacem is no exception to this and I am thrilled to have the opportunity to sing the soprano solos for the Bury Bach Choir’.

Other notable works Camilla has performed include Fauré’s Requiem, Mozart’s Requiem and Mass in C Minor, Rutter’s Magnificat and Jenkins’ The Armed Man.