James was the Bury Bach Choir’s rehearsal accompanist for around ten years under its former Music Director, Fred Oxley, and rejoined us as our hugely liked and respected accompanist in the early 2000s. He regularly plays the piano, harpsichord or organ at our concerts and is accompanying the choir at our concert on 16 November for both the Choral Suite from Karl Jenkins’s The Armed Man and as the primo player in Brahms’s piano four-hands arrangement for Ein deutsches Requiem. 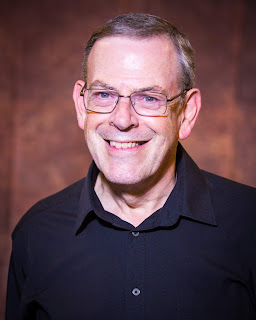 Keyboard playing has always been James’s passion and by the age of twelve he had passed his piano exams up to Grade VII. James went on to study music at Cambridge University and took lessons on the new harpsichord at Magdalen College. His first teaching job was in maths, and James thinks ‘there is definitely a correlation between music and maths, I did both at ‘A’ level – I suppose it’s to do with the analytical part of the brain’.

While he was teaching maths he took some organ lessons, and went on to take his ARCO and FRCO organ examinations, achieving prizes in both. Does he have a preference? ‘I think, heart of hearts, I enjoy the piano more, the harpsichord too.’

He worked at Meridian Records with John Shuttleworth as a producer and continued this while doing his day job at Culford School, where he was Director of Music from 1981 until retiring in 2013, though he is still the Head of Keyboard at the school. ‘At Culford I tried to be as versatile a general musician as possible’, he says, ‘in charge of musical events, running a chapel choir, accompanying for exams and concerts, doing musicals and playing the violin too!’

James has been associated with East Anglian music for many years and has directed many music groups and choirs, including the Thetford Singers, the St Edmundsbury Male Voice Choir, the Culford Choral Society and the Churchgate Sinfonia. He has been the Musical Director for the Suffolk Young People’s Theatre for over ten years and he has worked on many occasions with the Bury St Edmunds Amateur Operatic and Dramatic Society. He enjoys being an accompanist for many talented soloists and he is also the organist and choirmaster at Holy Trinity Church, Long Melford.

James likes the challenge of accompanying the choir. ‘One very important thing you must have as an accompanist is very good sight-reading – you can’t possibly learn everything you have to play.’ And he has to listen intently to everything at rehearsal, ‘I have to be on the ball so I’m ready for what Philip wants next, so the rehearsal can flow – and I like to interfere occasionally if I hear a wrong note!’

The choir members know how lucky we are to have him as our accompanist, and how helpful he is at rehearsals, doing his job with consummate skill and endless patience! ‘I enjoy it’, he says, in his usual understated way, ‘it’s nice just to be able to sit back and play!’