At our concert on 16 November at The Apex, our performance of Brahms’s Ein deutsches Requiem will be accompanied by two pianists – James Recknell (the choir’s accompanist and keyboard player at our concerts) and Christopher Moore – playing one piano. This piano four-hands version was transcribed from the orchestral score by Brahms himself.

Although his Requiem was conceived and written for a large chorus and full orchestra, Brahms also made two piano arrangements, one for two hands, and the four hands version that will accompany the choir at the concert. Each version has equal authority although the performances are inevitably different, and in each version the power and sincerity of Brahms’s invention shine through. 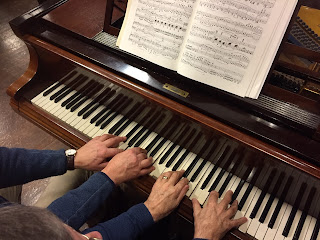 So – why do this at all, and why do it for one piano rather than two? The main reason is that one piano is more easily available than two, and massively more available than a full orchestra! The first known piano four-hands works were produced in the late 18th century, by which time the piano keyboard was generally large enough for two people – four hands – to share. Schubert later made full use of the original effects four hands could make, as did Schumann and Brahms, especially in his Liebeslieder Walzer. People could play these works in their own homes, and duet transcriptions played the same role as recording equipment did over a century later – they made classical music accessible for people outside the concert hall.

The two pianists sit side by side: the one on the right is called the Primo (James in our concert) and the other is the Secondo (Christopher). The score is usually printed side by side so each player has their own music directly in front of them. It helps if the pianists know each other and get on well, as ours certainly do! James and Christopher often cover events for each other in and around Bury St Edmunds (Christopher has stood in as our accompanist several times when James has been away, and they have both played for the choir before on harmonium and piano for Rossini's Petite Messe Solonelle).

Of the Brahms Requiem, Christopher says ‘this version for four hands is very effective because you’ve got a lovely wide range and depth of notes – four hands can obviously produce more notes than two. Inevitably, a piano doesn’t give all the colours that an orchestra can give, but the choir can give so much colour. It’s a big choir, there should be some splendid noise! An orchestra has its own dominance and the choir won’t be shielded by that this time’.

James, who used to play duets of Beethoven symphonies with his father, is mindful of the technicalities of piano four-hands. ‘When the work is so chordal, like the Brahms, you have to make sure you’re playing absolutely together.’ Christopher agrees: ‘Twenty fingers have to go down at exactly the same moment!’ ‘The Secondo player uses the pedals’, says James, ‘so you have to synchronise that – and for the page turner, we’re going to have to decide who nods, and will we both want the page turned at exactly the same time!’ Not to mention potential tangles when the Secondo's right hand has to intersect with the Primo's left hand…

One thing is for sure, the Apex audience members sitting above the piano will have a fascinating view! ‘I’m looking forward to it’, says James. ‘It will be great fun’ Christopher says, ‘exciting!’