Haydn (1732–1809) was born in Austria, the son of a wheelwright and a cook. Although his father wasn’t musically educated, he was a folk musician and the family frequently sang together and with their neighbours. Haydn became a prolific and prominent composer, writing over 100 symphonies, 83 string quartets, 45 piano trios, 62 piano sonatas, 14 masses and 26 operas. 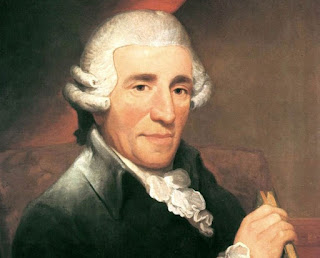 At a young age he entered the Choir School of St Stephen's Cathedral in Vienna, with a reputedly very fine treble voice which lasted until he was 16, when the Habsburg Empress, Maria Theresa, famously said ‘That boy doesn't sing, he crows!’ The choirmaster had previously suggested he become a castrato, but Haydn’s father wouldn’t allow this. Instead, Haydn left the choir ignominiously, having been caned for cutting off another boy’s pigtail!

His friend Johann Spangler took him in, and Haydn worked as a music teacher, organist and eventually accompanist for the Italian composer Nicola Porpora, from whom he later said he learned the ‘true fundamentals of composition’. He also studied the work of CPE Bach, whom he later acknowledged as an important influence.

Prince Esterházy died in 1790: his son Anton was not musical and the requirement for Haydn’s work dwindled, along with his salary. In 1790 he accepted an invitation to visit England from violinist and impresario Johann Peter Salomon. His music was already admired and played regularly in London and the visit lasted for over a year, to be repeated in 1794-5. Audiences flocked to his concerts and he became financially secure for the first time. The musician and scholar Charles Burney (father of Fanny) commented ‘Haydn himself presided at the piano-forte; and the sight of that renowned composer so electrified the audience, as to excite an attention and a pleasure superior to any that had ever been caused by instrumental music in England’.

Some of Haydn’s best-known works were composed around this time, including the symphonies Surprise, Military, Drumroll and London, and he was awarded an honorary doctorate by Oxford University. Haydn met Beethoven in London and Beethoven later became his pupil for a time.

Prince Anton Esterházy died in 1795, and his successor, Nicholas II, requested Haydn's return. A lover of church music, Nicholas set Haydn the task of composing a new setting of the mass every year. By this time he had become a celebrated figure in Vienna, and settled there, completing The Creation in 1798. It was first performed the following year, and Haydn led performances of it several times.

In 1804, Haydn retired from the Prince’s service and illness effectively prevented him from any further composition. In 1808 a performance of The Creation was organised in his honour. The very frail composer was greeted by Beethoven and Salieri (who led the performance), but it was too much for him and he left at the interval. On 31 May 1809 Haydn died peacefully in his sleep. Mozart’s Requiem was played at his funeral.