We’re delighted that Sarah Fox will be singing one of the solo soprano roles in our all-Mozart concert at St Edmundsbury Cathedral on Saturday 3 March, including the ravishing Laudate Dominum and, from the C Minor Mass, Et incarnatus est, which Mozart’s wife Constanze reputedly sang at its first performance in 1783.​

Looking forward to the concert, Sarah said ‘I don't know how you can be a singer and not love Mozart - he loved the human voice and wrote such wonderful music for us’. 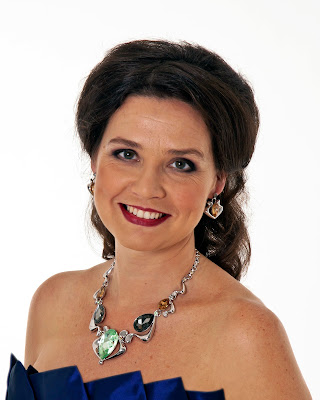 Born in Yorkshire, Sarah is one of the leading English sopranos of her generation. A former winner of the Kathleen Ferrier Award and the John Christie Award, she was educated at London University and the Royal College of Music, and is also an Honorary Fellow of Royal Holloway College, London University. She is equally at home in many musical genres including opera, folksong and musical theatre.

Her roles at the Royal Opera House, Covent Garden have included Micaela in Carmen, Asteria in Tamerlano, Zerlina in Don Giovanni and Woglinde in Der Ring des Nibelungen. Other roles include Susanna in Le Nozze di Figaro, Ilia in Idomeneo, Ellen Orford in Peter Grimes and Mimi in La Boheme.

Sarah has worked with many of the world’s leading orchestras and conductors, including the Berlin Philharmonic with Sir Simon Rattle, the Colorado Symphony Orchestra with Andrew Litton and the Oslo Philharmonic with Vasily Petrenko. She has appeared several times at the BBC Proms, the Edinburgh Festival and the Three Choirs Festival, and is a regular guest with Classical Opera Company and at London’s Wigmore Hall.

She is a regular guest on BBC Radio 2’s ‘Friday Night is Music Night’ and has performed several concerts with Rufus Wainwright. She was a judge on the second series of BBC TV’s ‘The Choir: Sing While You Work’ with Gareth Malone.

This will not be Sarah’s first appearance with the Bury Bach Choir:  she sang at a concert with us in The Apex in 2014, which she remembers vividly:  ‘It will be lovely to be back in Bury with the Bach Choir again and hopefully there will be no evacuations due to gas leaks this time around!’