Ann Brown, soprano, has been awarded Honorary Life Membership by the Bury Bach Choir, after a staggering 60 years’ unbroken membership!  Accepting the award for this outstanding record, Ann said ‘I joined the choir in 1957 because my father was in it, and I’ve stayed because I enjoy singing!’

This is only the second time since the choir began in 1932 that this honour has been awarded, and Ann is the only choir member to have sung under all three of the choir’s Music Directors.  She took piano lessons with the founder MD, Percy Hallam: ‘He was the organist at the cathedral and he suggested I join the choir, but I only sang in one concert with him because he died later that year’.

Ann has attended over 2000 rehearsals and performed in around 250 concerts over the years.  ‘I’ve sung Handel’s Messiah so many times, I know it off by heart!’  She also served on the Committee for several years.  She says ‘I come because I want to support the choir.  It doesn’t matter what the choir is singing, you should join in and give it your best.’

The main change Ann has noticed in her time with the choir is how much it has grown – from about 35 people in 1957 to 115 now.  ‘This means, of course, we can do bigger works now, which I enjoy, like Verdi’s Requiem.  Elgar is my favourite, though – and my absolute favourite piece is The Dream of Gerontius.’

As well as the Bury Bach Choir, Ann has sung with several other choirs and operatic societies in .  She once had a memorable encounter with Benjamin Britten: ‘I was singing the Rossini Petite Mass with the Aldeburgh Festival Singers, and I fainted in the rehearsal and hit my nose when I fell.’  It bled profusely and the men of the choir carried her out.  ‘I missed the concert, but Benjamin Britten brought me a glass of water!’ Grateful as she was, she finds singing his music very challenging – just like the rest of us! 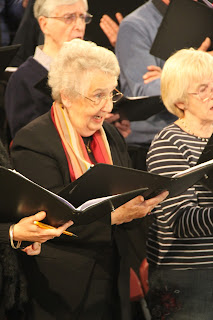 Singing in the choir is a family affair - as well as Ann and her father, her brother John is also a member, though sadly he doesn't share her unbroken membership.  John's wife Janet was also in the choir until she became ill, and John left for a time to look after her.

In fact, Ann’s remarkable record isn’t likely to be equaled any time soon. Has she ever considered stopping?  ‘I love singing and the choir, but I hope I’ll know when to retire, and Philip [current MD] won’t have to throw me out!’  We’re sure she’ll be singing with us for a very long time to come.

To find out about joining the choir or coming to our concerts visit  burybachchoir.co.uk