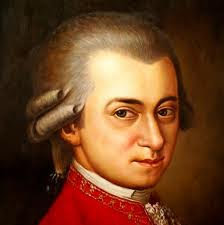 In 1781 Mozart moved to Vienna, delighted to be free of the shackles of working for the Prince-Archbishop of Salzburg and able to spread his wings in the musical world.  In Vienna, he initially lodged with the Weber family, whose four daughters inevitably caught his eye.  At first he paid attention to the eldest daughter, Aloysia, an exceptionally gifted soprano who went on to enjoy an illustrious career, but it was her younger sister, the quiet, doe-eyed Constanze, also a soprano of no mean ability, who was eventually to capture his heart. They married in 1782, somewhat against Mozart’s father’s wishes.

In the same year, possibly as a thank-offering for his marriage, Mozart resolved to embark on a large-scale mass setting that would showcase two sopranos, with lesser roles for the tenor and bass soloists. Perhaps by employing a pair of sopranos so brilliantly, Mozart was encapsulating something of his feelings for the Weber sisters.

Five months after the wedding, Mozart wrote from Vienna to his father Leopold, in Salzburg, about his promise to write the mass.  ‘I truly made this promise to myself, and I truly hope to keep it.  When I made it my wife was still single – but since I had firmly resolved to marry her soon after her convalescence, it was easy for me to make the promise.  As you know, however, circumstances have frustrated our planned journey [to Salzburg], but the score of half a mass, which is lying here in the best expectations, is the proof that I really made the promise.’

Mozart’s visit to his father and sister, Nannerl, was postponed until after the birth of his son in June 1783, and they arrived in Salzburg in July.  The completed parts of the Mass in C minor, the Kyrie, Gloria, Sanctus and Benedictus, received their first performance on 26 October 1783 – reputedly the only performance in Mozart’s lifetime.  He was evidently out to impress: he could show off Constanze’s musicianship in the soprano solos to Leopold, and he could cock a snook at his former employer and colleagues at the Archbishop’s court.

All this concert’s music comes from relatively early in Mozart’s career.  Composed in 1772 when Mozart was sixteen, his opera Lucio Silla, from which the overture will be performed, was commissioned by the Milanese ducal court, following the success there of his earlier Mitridate, rè di Ponto (1770). The story centres on the unpopular dictatorship of Lucio Silla, with themes of thwarted love, political marriage and murder plots.

Mozart’s Vesperae solennes de confessore is one of two full settings of music for the Office of Vespers from the period 1779–80, composed during Mozart’s tenure as a church musician at Salzburg’s episcopal court. Comprising five full psalm settings and the Magnificat, the collection is one of the most enduring examples of Mozart’s church music. The work gave Mozart the opportunity to write in a varied range of styles – from the then fashionable rocco manner to the austere fugal setting of Laudate pueri and the celebrated Laudate dominum, a radiant setting that would not be out of place in one of the composer’s later operas.

To buy tickets for this concert, visit burybachchoir.co.uk